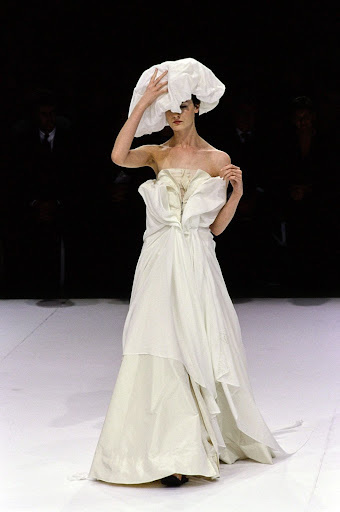 Is anti-fashion an effective and relevant movement in a progressively consumerist culture? Social media and commercialization has led to a decline in the authenticity of rebellion, effectively betraying the original movement by commodifying the very idea of protest and perseverance. Anti-Fashion has been an essential part of the fashion world with innovative avant-garde designers like Maison Margiela, Vivienne Westwood, and Yohji Yamamoto. These designers actively worked against the trend forecasters and popular demand. They took inspiration from the desire to create art outside of the traditional medium, and therefore, made a monumental impact on the fashion industry. However, with the rise of social media and fast fashion, is the ‘Punk’ aesthetic and rebellion as we know it truly still anti-fashion? Can anti-fashion co-exist with a rapid trend cycle, which can be credited to social medias such as Tik Tok and Instagram promoting influencer culture?

Great art is traditionally hallmarked by cultural pain. Notably, the AIDS epidemic in the 1980s, which proved to be an incredibly important year for fashion, especially featuring queer designers such as Perry Ellis. This pain is usually born from a group of oppressed people in a concentrated urban area of culture; in the fashion world these were cities like New York City, Paris, London, and so on. The importance of people of color and queer influence in fashion is undeniable. Fashion is, in its essence, an expression of rebellion against an oppressor. Since fashion has been a traditionally feminine aligned activity, it is a place for an unrepresented area of the art world to flourish. Therefore, it joins the rest of the art world in representing the constant fight against an oppressive system. Another facet of the commercialization of clothing that is seen as ‘counter culture’ is the cultural appropriation of garments that are significant in oppressed communities; this is paramount in the Black community, with the constant exclusion and brutality they face, the majority of current trends are cherry-picked from Black culture, and the meaning is more often than not pushed aside to prioritize aesthetic. The hoodie, something that to this day is associated with and used to target and demonize black people, now can cost upwards of $700 from a designer brand and $60 from a retail store.

But what happens when the designers, who once spearheaded the anti-fashion  movement, fall into the background and bored 13-year-olds inspired by Pinterest run the trend forecast? Evidently, the result is both environmental and cultural disaster. The rise in popularity and celebration of these designers eventually became the downfall of the very movement, and it is now a palatable and main-stream flaunt of wealth. These once rebellious movements influenced fashion so much that they lost their sense of anti-corporate sentiment that the movement originally thrived on. With the rise of social media, there is a constant cycle of people who want to differentiate from the mainstream and adopt certain alternative subcultures. They buy clothes from fast-fashion brands like Shien or Urban Outfitters, leading to more clothing production. Because these garments are widely accessible due to low prices and poor quality, people tend to go through these clothes and subsequently trends very quickly. The issue with this lies not only in the fact that it violates the very nature of fashion, led by large corporations using incredibly unethical labor, but also within the fact that it is incredibly detrimental to the environment. The fashion industry being one of the largest polluters of the environment, making up about 5% of the world’s greenhouse gas emissions.

The solution to the problem of fast-fashion seems complicated; however, it is extremely simple and one of the only industries where individual consumers can play a large role in the choices of the industry. People should buy less things, not just with fashion but with everything. Spend time developing your personal style, buy secondhand clothes, and always check a brand’s source of labor.