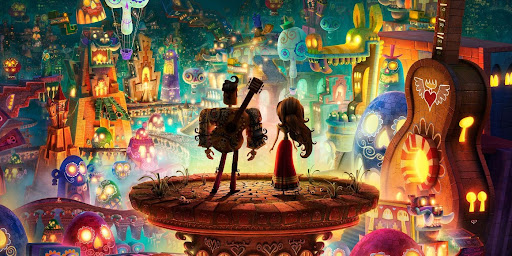 The Book of Life

The resemblance between the films is uncanny, to say the least.

With the recent release of Disney’s newest animated film, “Encanto”, I was inspired to reflect upon the past of Hispanic representation in blockbuster animation. The first two examples that instantly came to mind were “The Book of Life” and “Coco”, mainly because of the numerous similarities and stark differences that the films have. Both films center around Dia de los Muertos and the Land of the Dead, two important aspects of the Mexican afterlife, and emphasize the importance of family. Both main characters are held back from their musical passions by their families’ traditional values, live in Mexican towns, and even kill their respective antagonists with a comically large bell. However, they each successfully express Latin American culture in their own unique way.

“The Book of Life” represents classic Mexican folklore. It’s essentially every bedtime story wrapped into one. Its charismatic heroes and malicious villains feel straight out of a storybook, and the vibrant colors combined with the authentic Mexican designs help immerse the viewers in its dazzling world. The story describes the life-long quarrel between two best friends for the heart of the mayor’s daughter, and chaos ensues when gods of the underworld begin placing their bets on the winner. Expressed entirely through wooden puppets with comically exaggerated designs, the odd charm of the film clearly demonstrates the love that went into its creation.

In a 2014 interview shortly before the film’s release, Jorge R. Guttierez, the director and creator of the film, spoke passionately about its conception: “My favorite times were sitting with my grandpa and hearing him tell me stories. It was the same thing with my dad and it’s the same thing I do with my son… I want to pass on that tradition.” Guttierez’s sentiments show that the creation of the film was less about making a blockbuster hit and more about crafting a personal legacy for his family and his children, demonstrating the care and detail that went into its conception.

The movie is a tribute to that traditional love of storytelling, accurately capturing the fantastical drama of a childhood story. While these elements enable it to appeal to children and adults alike, the film ultimately suffers from a lackluster and formulaic story. Its plot structure resembles practically every love story ever, and is easy to predict; the good guys always win in the end. Although it teaches moral lessons on the importance of friendship and family, these lessons have been repeated time and time again. Nevertheless, this archetypal story plays into the film’s representation of traditional Mexican folklore, and portrays the classical roles in a fresh new light with an authentic, heartfelt tone.

“Coco” takes a slightly different approach to Mexican culture, choosing to focus on the importance of family heritage and relationships through traditions such as Dia de Los Muertos rather than the value of stories passed on. Released in 2017, it has often been criticized for “copying” many of its ideas from the “Book of Life”, which was released 3 years prior. While the two films may contain many similarities, “Coco” has much less authentic charm to its name. The fully-rendered Computer Generated-Imagery (CGI) backdrops and characters featured in the film may be incredibly realistic and beautifully lit, but they fail to capture the whimsical charm of its predecessor.

The movie follows Miguel, a young boy living with his strict family in a small Mexican town, as he struggles to follow his musical passion despite the limitations placed by his family’s traditions. Despite lacking in visual charm, the film’s storytelling and depictions of the traditional Mexican family are on point, and the characters and their motives are fully fleshed out. Miguel’s family is initially treated as the antagonists of the film, but they later show to have reasoning and emotional trauma behind their hatred of music. Additionally, “Coco”’s plot is much more straightforward than ““The Book of Life””, as it chooses to depict a small main cast and only characters necessary to the plot (except for Dante, Miguel’s ridiculously unfunny canine companion). This allows it to emphasize depth to characters such as Hector and Miguel beyond simply being protagonists, and creates more believable interactions between their personalities. “Coco” serves as a great example of Latin American families, the struggles within them, and the ways that they can be reunited through love and passion.

It’s hard to say that one film is definitively better than the other. They represent different aspects of Latin American tradition; one symbolizes the stories, the other symbolizes the storytellers. As a Latino, I’m proud that both films were able to bring the Latin American experience to theaters across the world, and broaden the perspectives of children everywhere on the spectrum of animation and Mexican culture. Who knows? Maybe I’ll watch “Encanto” over the weekend and see how it compares. We’ll see.

Editor’s Note: Due to late publication, Luca actually had a chance to watch Encanto. He said it was “meh”, but he liked the music.