How Hachiko the Faithful Dog Helped Me Find My Purpose 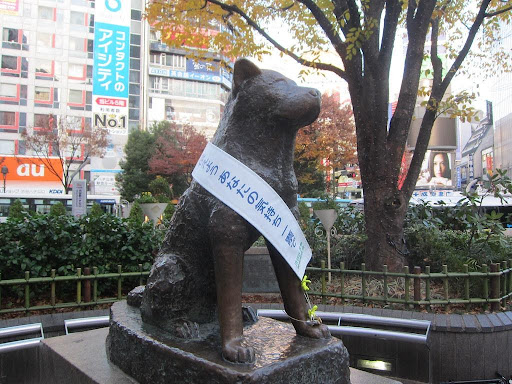 “The greatest fear dogs know is the fear that you will not come back when you go out the door without them.”

Through their unassuming faithfulness, loyalty, and love, animals have always brought me joy and happiness. However, the day I decided to take my passion for animals a step further and become a veterinarian was when I visited the Hachiko statue in Tokyo, Japan.

Four years ago, my family and I went on a trip to Japan. We visited many famous landmarks, though seeing Hachiko’s statue at the Shibuya Station in Tokyo was the most moving and influential experience for me. Hachiko, an Akita Inu dog, was born on a small farm in 1923. Shortly after Hachiko’s birth, Hidesaburo Ueno, an agricultural scientist, adopted him. Ueno and Hachiko would meet each other every day at the Shibuya Station, where Ueno would board a train taking him to work. While waiting for his owner every day, Hachiko received lots of treats, praise, and love from local shopkeepers and pedestrians because of his friendly and cheerful behavior. Unfortunately, after several years of Ueno greeting Hachiko at the station, Ueno died due to a brain hemorrhage. Of course, Hachiko was unaware of this, so he continued waiting at the station every day. Even when he was moved across different homes, Hachiko returned to Shibuya station daily for nine more years until his death. In honor of Hachiko’s loyalty to his owner, a statue was built for him and placed outside the Shibuya station. Hachiko’s determination, faithfulness, and pure love inspire and motivate many people to stay strong, just as he has done for me.

Hachiko’s statue was not the only place where I noticed love and care for animals, but in many other parts of Japan, too. On our visit to Nara Park, we saw deer approach visitors fearlessly. Walking through the Arashiyama Forest, monkeys greeted tourists joyfully. One day, while we walked through Tokyo city, we noticed a small patch of grass where bunny owners let their pets roam freely. It is evident to me that animals and nature are a unique and crucial aspect of Japanese culture; they are cherished, welcomed, and valued.

Japan is also working to formally incorporate animals into its society. Service animals were not widely accepted in Japan until the recent Act on Assistance Dogs for Persons with Physical Disabilities was implemented in 2002. This law allows citizens to travel publicly with trained service animals, which is a concept that many countries are yet to acknowledge. Additionally, Japan is home to the largest number of animal cafes globally. It can be hard to own a pet in Japan; it is a very urban and dense area without much room for animals to explore. Therefore, animal cafes stand as a solution to the difficulties of owning a pet in Japan, providing an emotional outlet for support.

Not only are pets becoming a more significant factor in Japan, but throughout the entire world, too. During the COVID-19 pandemic, many people adopted pets to receive emotional aid. According to the article “Did the COVID-19 Pandemic Spark a Public Interest in Pet Adoption?,” adoption rates during the COVID-19 period saw a significant increase compared to years before. The article states: “Pet, dog and cat adoption peaked between April and May 2020, the early epidemic phase of the pandemic…Compared to the same period in 2019…both dog and cat adoption increased by up to 250%”. This indicates a major need for additional veterinary services to compensate for the growth in new pet ownership. Thus, pursuing a career path in veterinary services can lead to an essential and prosperous future due to the relevance of animals today. Our pets reliably make us feel needed and accepted, which makes us responsible for returning the gift of friendship and care to them.