Why Teens Today are Often Wrong but Never in Doubt 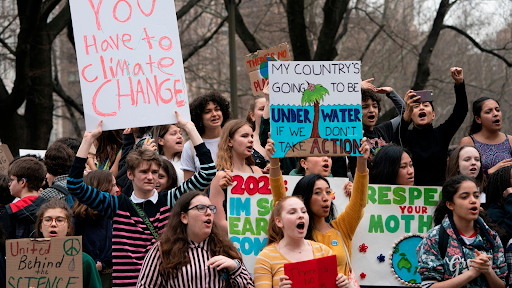 NYC high school students walk out of class to protest against climate change.

The political involvement of high schoolers today seems uniform and largely automatic. This is powered by a belief that the main issues of the day are solely moral, rather than difficult matters of tradeoffs and methodology. One only needs to identify a problem, express outrage that it hasn’t been solved already, and demonize anyone who suggests anything other than the “obvious” solutions.

The 1960s civil rights movement really was a moral issue for which this attitude had a place. Today’s issues are more technical. Effectively addressing them requires knowledge of the impact that different approaches will have, not merely political might. Teens tend to lack experience and expertise but are placed at the forefront of the fight against climate change, for example. They are also urged to help address matters of “social injustice” without being told of alternative points of view. It’s unlikely that any would be able to articulate some of the arguments opposing minimum wage laws or give some of the alternative explanations for the disparities between races aside from the explanation of systemic racism.

Teens today are steeped in a political environment that prioritizes moralizing over analyzing.

Since many people try to evaluate the morality of a stance before its efficacy, those who advocate unpopular remedies for climate change are dismissed as mouthpieces for corporate interests. The fact that the cost of climate policy would be borne by consumers as well is ignored, and the intentions behind alternative solutions are questioned.

The supposed moral superiority of one stance over another is sometimes reinforced by claims that certain issues are woven together.  For example, it is said that banning fossil fuels is doubly imperative because climate change most affects the poor. But policies that would force a costly technological transition may be even more harmful to the poor.  The poor, particularly in developing nations, may even prefer the “fairy tales of eternal economic growth” that Greta Thunberg denounces. Moral grandstanding not only adds no new understanding of today’s issues, but worsens vitriol.

Ad Hominem is now the dominant mode of argumentation. Many found it impossible for Donald Trump to be right about European underspending on defense because he was Donald Trump. Recent events show he had a point.

Colleges and older generations transmit the moralizing style to teens. These sources of influence have overlearned the moral lessons of the 60s and 70s.

Because colleges congratulate themselves on their “​​commitment to service and civic engagement” and wish only to accept the next generation’s leaders and public servants, it makes sense that organizations like Fridays for Future (FFF) and local clubs would spring up to help students meet this demand. Enthusiasm on the part of the students is dubious.

Boston College asks applicants: “In 2020, we faced a national reckoning on racial injustice in America – a reckoning that continues today. Discuss … how you have been inspired to be a change agent around this important issue.” The admissions committee is selecting for virtue and conviction, not for intellectual humility and competence. Students anticipate these selection criteria by joining organizations that they themselves are sometimes skeptical of, like FFF.

Another influence is self-important and nostalgic adults.

Some aging hippies attend demonstrations holding signs urging us to get our policy advice from children. Others can be seen recruiting at climate rallies for groups like extinction rebellion, known for egging on teens to get arrested. They seem to do so as a throwback to the 1960s (XR, a climate activist group, itself claims inspiration from the civil rights movement) when various movements found a lot of support from students. The generation that witnessed the triumph of these movements is now attempting to inspire the same sort of action in today’s youth.

Adults elsewhere prevent students from understanding the trade-offs and value of other points of view when addressing today’s issues by constantly reminding them of a glorious past. Far too much classroom, media, and holiday time is spent remembering these moral struggles and outrages instead of preparing students to solve a different kind of issue.

Even some textbooks are saturated with this moralizing mindset.

For him, the issue of union power is a simple conflict between labor and management. Favoring alternative methods as a means of promoting workers’ economic progress is inconceivable to him.

He dismisses Milton Friedman as a mouthpiece for the business sector, calling his ideas “extreme”: “Many businessmen who desired to pursue their economic fortunes free of government regulation, high taxes, and labor unions found intellectual reinforcement in the writings of the young economist Milton Friedman. In 1962, Friedman published Capitalism and Freedom…” In fact, Friedman (who turned 50 in 1962) fiercely criticized anticompetitive conduct by businesses and was particularly offended by their hypocritical use of free market rhetoric. While it’s Milton Friedman who is smeared, the real disservice is done to the reader who is closed off from finding Friedman reasonable.

Earlier in the textbook, “the highly unequal distribution of income” is portrayed as a major cause of the Great Depression while the economists’ consensus that the Federal Reserve’s inaction turned a recession into a depression is ignored. In fact, the Federal Reserve is not mentioned in the entire section on the Great Depression. A moral distaste for inequality is consulted before economics on this predominantly economic topic.

In a further expression of moral distaste, the textbook suggests that the Depression could have been solved if Herbert Hoover and Andrew Mellon cared more about those suffering: “In the eyes of many Americans, President Hoover’s response to the Depression seemed inadequate and uncaring. Leading advisers, including Andrew Mellon, the wealthy secretary of the treasury, told Hoover that economic downturns were a normal part of capitalism.” For the author, Mellon’s opinion is explained by his wealth rather than his experience with the recession of 1921, where the Federal Government took no action and oversaw a much faster recovery than that of the Great Depression.

This image of the Hoover administration serves to create a vision of politics where all that is important is intentions. What’s typically missing from this depiction is an acknowledgment of Hoover’s policies that were essentially predecessors of FDR’s New Deal and the first of their time. It was under Hoover that tax rates on the top income bracket were more than doubled from 25% to 63% and public works such as the Hoover Dam began. If an honest picture of this period were given, it would be clear that intentions are not all that matters.

Social Media further enables this shallow moralizing. Because it is effortless, people can circulate headlines and signal their virtue without a second thought. In one case, the article “Amy Coney Barrett, About to be Confirmed to the Supreme Court, Sees a Scenario in Which Abortion Should be Punishable by Death” was circulated. Legal experts note that Supreme Court Nominees rarely answer hypotheticals posed by Senators during the confirmation process. As the article itself reveals, this is precisely what happened.

BASIS Independent Brooklyn has done an excellent job of giving students the tools needed to have well informed and thought-out opinions on political matters. I am grateful to have been given access to these tools.  They equipped me to understand the confirmation process for U.S. Supreme Court nominees and prompted me to question the slanderous article on Amy Coney Barrett. However, more work is required by students to fend off attempts to turn them into political pawns.

Students have an obligation to do the additional work of applying the knowledge taught in BASIS Independent Brooklyn’s government, economics, and history courses, questioning what they hear, whether on social media or later in their education, and seeking other points of view before opining on political matters.