When thinking of great contemporary films, one might immediately come up with films released in the last 20 years. American Psycho (2000) contains the biting satire of the upper class and materialism that defines the wealthy, South Park The Movie (1999) openly criticizes parenting that takes no responsibility for its actions, but blames its problems on a scapegoat, and Us (2019) explores class division and the conflicts that arise when the lower class is mistreated. Satire and social commentary have been a part of film since Chaplin’s The Great Dictator in 1940 and they have continued on through different genres and franchises. However, there is more to satire and social commentary than just being relevant at the time. The mark of a true socially relevant piece is if it can stand the test of time, and a film that is arguably more relevant than when it came out 31 years ago is Spike Lee’s Do The Right Thing.

Do The Right Thing premiered in 1989 and shared many elements of blaxploitation films from the 70s and 80s. Blaxploitation was a subgenre of exploitation films: movies that capitalized on the success of a certain trend of the time, specific genres, or explicit, sometimes offensive content. Blaxploitation did exploit ideas, but majorly from the current race relations and social climate of the late 1980s to the early 1990s. Spike Lee was heavily involved in this filmmaking with his films like She’s Gotta Have It (1986), Malcolm X (1992), and Crooklyn (1994). Each of them explored black culture and had black people or black communities as the protagonists while commenting on the racial tensions of the time, which is  best demonstrated in Do The Right Thing. 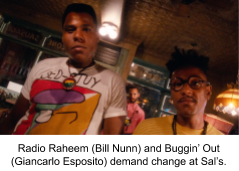 Do The Right Thing doesn’t really have a plot as it feels like a documentary. The movie doesn’t focus on one character, but rather the neighborhood of Bed-Stuy as racial tensions flare up and boil on the hottest day of the year. As the day goes on, you can feel the anger growing inside everyone, from Buggin’ Out to Sal and even Mookie, who’s a passive protagonist until the final act. Everything feels raw and real, adding to the film’s ultimate message to “do the right thing.” This film maintains the laid back feel of films such as The Big Lebowski or Lady Bird, but never lets its audience feel as if they are safe. There’s a constant sense of anger throughout the film, but Lee doesn’t have every scene be a big moment. In the second act of the movie, tension is still building for the final act, but we are shown mundane activities such as three men sitting around and talking, however even that still builds tension as their conversation is about the Korean shopkeeper across the street. This is one of the best aspects of Do The Right Thing and leads into one of the most explosive and powerful finales in all of modern cinema.

Throughout the film, there is an important and central symbol in the neighborhood: Sal’s Pizza. Multiple times in the film, we are told that Sal’s is a defining factor in this community, that many of the characters grew up eating Sal’s pizza as he watched them grow up. Sal’s is the center of Bed-Stuy, but it’s also the antithesis of what Bed-Stuy is. Sal clearly harbors some racist thoughts as shown by his use of a racial slur starting the literal and metaphorical raging fire of the finale. His son Pino has been explicitly racist since the start and not afraid to hide it in the finale, and while Vito isn’t explicitly racist in the movie, he turns a blind eye to what his brother and father do. Sal’s Pizza is also where many of the film’s most tense moments happen, such as when Sal metaphorically takes away the identity of Radio Raheem by literally destroying his boombox, a boombox on which Public Enemy’s song Fight the Power plays all day long. By doing this, Sal takes the Radio out of Radio Raheem and this theft ultimately leads to anger. 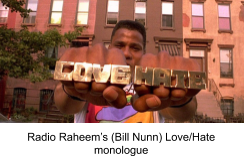 On a more serious note, current events have made many rewatch Do The Right Thing, and it’s finale incredibly closely, as the film ends with one of the most chilling murders in cinema. After the police arrive to break up the fight between Sal and Radio Raheem, the cops put Raheem in a chokehold and hold it until he dies while the crowd is begging and demanding for the officers to release the hold on Raheem. This death hits even harder as this isn’t fiction. It was a reality in 1989 and it’s a reality in 2020 with the murder of George Floyd and the murder of Eric Garner in 2014. Lee wants us, the viewers, to realize and witness the relationship between African Americans and the police who are supposed to protect them. He wants us to know that a black man can be murdered in cold blood on a sidewalk for illegally selling a cigarette while a white teenager can massacre nine innocent people in a church basement, but be put in handcuffs and safely taken to trial. 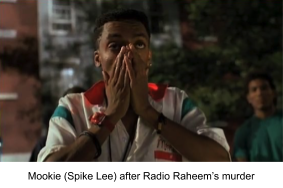 Doing the right thing means standing up against injustice and fighting for it to end. The right thing is to fight back, not stay silent. If Spike Lee couldn’t make us see his message 31 years ago, perhaps we need to open our eyes today.